In November 1952, professor George Adamski claimed to have experienced UFO sightings and an alien encounter with a being from Venus.

In the book he co-authored with Desmond Leslie, Flying Saucers Have Landed, Adamski wrote that he dreamed of meeting aliens and would often use his telescope to search the skies for UFOs. On that afternoon in November, the Polish born professor decided to picnic with six friends in the California desert near the city of Desert Center. While there, all seven witnessed what they called a silver cigar-shaped UFO that moved toward the picnic area and hovered quietly nearby. He hopped into his car and with his secretary, Lucy, drove toward the mystery object.

While his friends watched from a distance, he began taking photos until someone appeared about ¼ of a mile away near a ravine and signaled Adamski to approach him. At first the group believed the man was a prospector, however, Adamski reported that when he neared the man, he seemed otherworldly with a beautiful face and long, wavy blonde hair. Adamski learned through telepathy that this being was from Venus and was named Orthon.

Venusian aliens are also known as Nordic aliens whose purpose is to observe and also provide warnings or information helpful to mankind. Orthon warned Adamski about the potential of nuclear war. After their telepathic conversation, the Venusian took Adamski to his dome shaped UFO nearby. When the alien departed, Adamski claimed the alien had left footprints. He and his companion, George Hunt Williamson, an anthropologist, just so happened to have supplies available to take casts of the footprints. They also observed strange symbols on the bottom of each footprint casting.

Adamski recorded that he had several encounters with the alien named Orthon from Venus over a five year period following his initial encounter. Not many believed Adamski’s story despite the fact that his six friends supplied sworn statements supporting the alien visitation and their witnessing of the UFO sightings the same day.

For further information about his fascinating story, I recommend his book and audio CD, which can be found by clicking the picture link below. 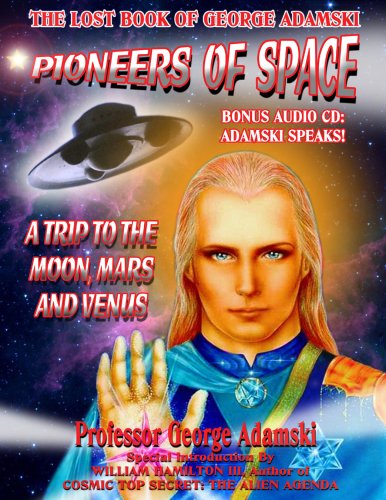