Are Aliens Real? Alien Encounter of Helen and Betty Mitchell

Are aliens real is a question many ponder especially with the increase in UFO sightings in the last few years. But alien sightings and UFO encounters have been witnessed for hundreds if not thousands of years. One particular alien encounter happened in a quite normal way back in May 1957.

Enjoying a nice shopping trip, sisters Betty and Helen Mitchell decided to take a break by stopping at a coffee shop in downtown St. Louis. As they sat chatting at the dining table, two men approached them and introduced themselves as space brothers from an alien spaceship orbiting Earth. The two men were dressed in grey suits and called themselves Elen and Zelas. Of course, the two women laughed thinking the men were joking. That is until the two mysterious men began telling the women about specific incidents that had happened to them during childhood, things that only the Mitchell family itself could have possibly known.

The women listened with increasing interest as the men told them the “Space People” had been watching the sisters for the last 8 years and had selected them to bring their message to mankind. They continued the conversation for nearly two hours until they were quite convinced these aliens were real.

About a week after their initial alien encounter, both women felt drawn to go back to the coffee shop. Sure enough upon their return, one of the spacemen sat at a table appearing just like any other human in the place. In this meeting, he instructed the sisters on how to build a communication device in order to communicate with the mother spaceship. Over a six month period, the women used the device to communicate with the alien spacecraft including the commander named Alna.

By November, Helen Mitchell rendezvoused with one of the alien beings and went with him to where the alien’s spacecraft was hidden in a nearby Illinois forest. In a short 15 minute flight, Helen claimed she traveled to the mother ship orbiting our planet. Once on the ship she met with Commander Alna and even placed a phone call to her sister Betty’s home. She was able to view Betty as they spoke on this spaceship communicator. It sounds very similar to our web cameras of today but very much an impossibility in 1957.

These aliens claimed to be contacting the Mitchell sisters to warn against the use of nuclear (atomic & hydrogen) bombs. They said radioactivity already contaminated Earth and any more could cause mutation and destruction.

They additionally warned against other alien beings that are not friendly. These negative entities were described as small and coming from deep space. Their intention is to confuse and bring disturbance to mankind.

So are aliens real? To Helen and Betty Mitchell they certainly are, and they wrote a booklet in 1959 entitled We Met the Space People. Of course in their day and age, many believed their claims to be ridiculous. Unfortunately, hindsight being what it is, in our time we know that subsequent alien abduction stories and encounters offer similar descriptions and warnings by aliens visiting earth. 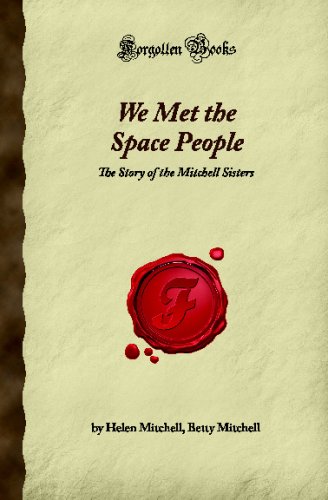